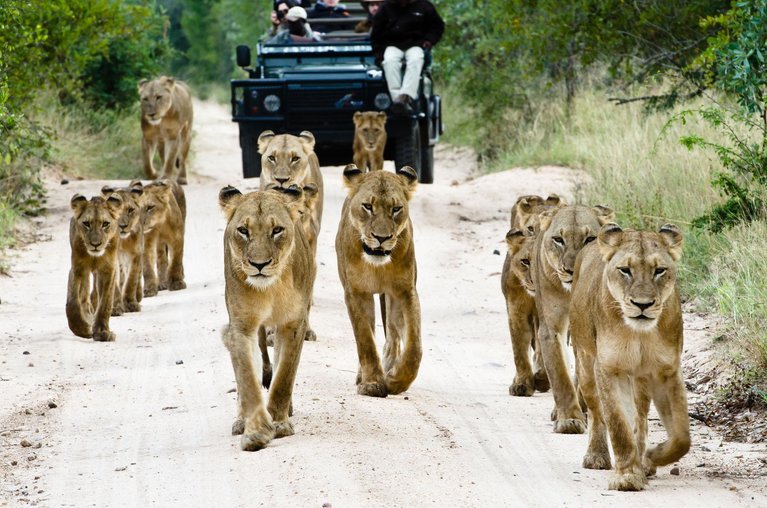 South Africa’s magnificent Big Five – lions, leopards, rhinos, elephants, and African buffalos – deservedly get a lot of press, but the Rainbow Nation has much more to offer. In this post we’ll look at some of the often-astounding creatures found in South African game reserves – from bizarre birds and elusive big cats, to riveting reptiles!

The ‘Secret Seven’ include the serval, the African wild cat, the extraordinary and endangered pangolin, the aardvark, the civet, the large spotted genet, and the prickly porcupine.

All of these are rare nocturnal animals with secretive ways perfectly adapted to going their mysterious way mostly undetected. Seeing one of these during a night drive will assuredly elevate your night drive to a Special Occasion!

We’ve all seen pictures of grazers, particularly buffalo, with oxpeckers climbing all over them and feeding on ticks and other ectoparasites. However, these are almost certainly the red-billed variety – the yellow-billed oxpecker is much rarer and was even thought extinct as early as 1915.

Yellow-billed oxpeckers are highly specialised birds that inhabit an extremely narrow ecological niche that is closely linked with the African buffalo’s fortunes. Reported sightings of them nesting on an African buffalo’s back are not true, though – they nest in cavities in trees.

A white rhino is not actually white, of course! The name comes from ‘wijd’ which refers to its wide, square upper lip as opposed to the more pointed upper lip of the black rhino. While the bigger white rhinos are predominantly grazers, black rhinos are browsers.

White rhinos are the more placid of the two species, but black rhinos have a reputation for being short-tempered and aggressive. Nor is the black rhino black, of course – both rhino species are the same sort of a darkish gray colour!

But whatever their colour, both species have been poached mercilessly for their horns, which are just worthless chunks of keratin, like fingernails! Critically endangered black rhino numbers are estimated to be below 6,000 now, while white rhino numbers are hovering around the 19,000 mark.

Conservation efforts worldwide are trying to save these magnificent animals and combat the unconscionable trade in rhino products. Rhino sanctuaries that care for orphaned rhino babies and many organizations like the Sabi Sand Rhino Warriors play important roles in these conservation efforts.

With leopards regularly seen and photographed, and a thriving prey population of impala, nyala, kudu, bushbuck and warthog, Sabi Sands is the ultimate destination for leopard lovers. Its leopard density of about 12 leopards per 100 square kilometres indicates that the Sabi Sands likely has the greatest leopard density in South Africa!

Though leopards are normally secretive and elusive, many of the leopards in the area are so habituated to vehicles that excellent sightings of these magnificent cats are quite common. And with the Sabi Sand Safari lodges offering some of the best luxury safari accommodation on the planet, nature lovers might find it hard to tear themselves away from the reserve!

The elusive white-backed night heron is a water-loving bird that becomes active at dusk, and frequents dams and slow-flowing rivers. They are opportunistic feeders often found in riverbank vegetation or shallow water where they take fish, insects, frogs, crustaceans, and freshwater crabs. Their strong spear-shaped bills equip them superbly to do so. Their remarkably large eyes automatically correct for the refraction that takes place in water, making them very efficient hunters.

Though one of the lesser-known water-frequenting birds, they occur from the Eastern Cape all along the Indian Ocean coastal belt to the Mpumalanga Lowveld and southern and central Africa.

Like turtles and tortoises, terrapins are reptiles with shells made of keratin. Unlike nails, hair, claws, horns or beaks, however, a terrapin’s shell contains nerves, so they can ‘feel’ through their shells. They are cold-blooded reptiles that breathe air, and always lay their eggs on land.

These captivating creatures can often be spotted at waterholes. They’re also often seen on top of the hippos. And bizarrely, the hippos don’t seem to mind at all but even seem to facilitate the terrapins hitching a ride!

In this post we have barely scratched the surface of the charming animals that South Africa can offer you. There are many more to enchant, amaze and delight you, not to mention the spectacular scenery, diverse plant life, and fascinating cultural experiences the country has to offer. You will just have to come and see for yourself!